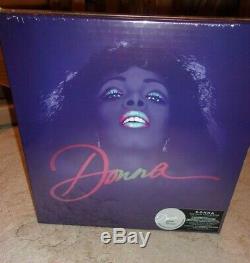 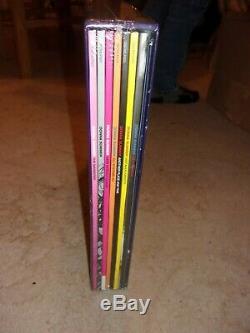 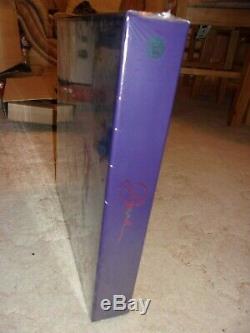 8 x Vinyl LP Box Set. This superb limited edition Vinyl LP box set collates the six subsequent albums originally released on Geffen Records and Atlantic Records (The Wanderer, Donna Summer, Cats Without Claws, All Systems Go, Another Place And Time and Mistaken Identity), as well as the initially shelved 1981 album (Im A Rainbow) that was first released in its entirety in 1996 but now receives its long-overdue debut Vinyl LP release, as a 2LP Gatefold album. Also included within the box is a 12x12 booklet, featuring newly authored liner notes by noted US writers Christian John Wikane and Justin Musicology Kantor, with brand new interviews undertaken with, amongst others, Bruce Sudano, Brenda Russell, Greg Phillinganes, Harold Faltermeyer, James Ingram, Joe "Bean" Esposito, Kim Carnes, Sylvester Levay, as well as extracts from archive interviews with Donna Summer by Christian John Wikane. Also included are a unique 12 x 12 poster and a facsimile of the hand-scored sheet music recently unearthed from within the 1981 multi-track tape box of State Of Independence. The individual re-mastered re-issues, are packaged as heavyweight 180gms vinyl LPs, containing the original full album credits and acknowledgements, the lyrics, as included in the original Geffen and Atlantic LP Records.

Who Do You Think You're Foolin. Love Is Control (Finger On the Trigger). (If It) Hurts Just a Little. Love Is Just a Breath Away. It's Not the Way.

Only the Fool Survives - Donna Summer & Mickey Thomas. I Don't Wanna Get Hurt. When Love Takes Over You. This Time I Know It's for Real. In Another Place and Time.

If It Makes You Feel Good. Love's About to Change My Heart.

Heaven's Just a Whisper Away. Cry of a Waking Heart. What Is It You Want.

I Believe (In You) - Donna Summer & Joe'Bean' Esposito. Walk On (Keep On Movin'). Don't Cry for Me Argentina.

A Runner With the Pack. The item "DONNA SUMMER DONNA THE VINYL COLLECTION 8-LP LTD EDITION BOX NEW & SEALED" is in sale since Saturday, June 20, 2020.