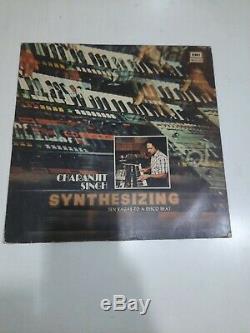 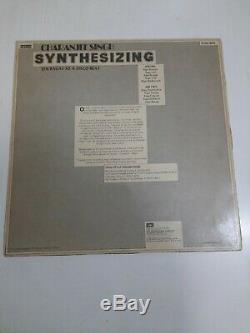 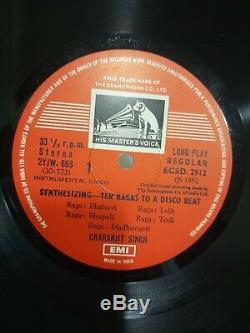 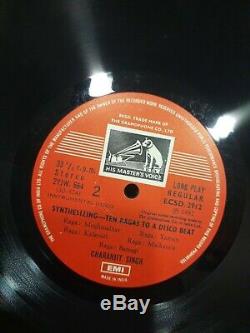 Charanjit Singh - Synthesizing Ten Ragas To A Disco Beat. IMPOSSIBLE TO GET ANYWHERE ELSE!!!!!!! YOU MIGHT FIND MY PRICE ST EEP BUT IT IS WORTH IT AS THIS VINYL SURFACES ONCE IN A BLUE MOON! AND IN THIS EXCELLENT CONDITION, NEVER IN A NY MOON!! SERIOUS OFFERS, HOWEVER, ARE WELCOME. ONLY ONE AVAILABLE MADE IN INDIA.

(SEEMS RECORD HAS HARDLY BEEN PLAYED). SLEEVE CONDITION -- As per picture.

Please see pictures for more details. Please feel free to ask any questions. Comments from some serious fans. SERIOUS FIND HERE - 1982 PROTO-TECHNO MADE IN INDIA - AN ABSOLUTE TREASURE TROVE OF EARLY ELECTRONIC DANCE MUSIC THAT SOUNDS LIKE APHEX'S ANALORD TRANSPORTED TO EARLY 80'S MUMBAI - DO NOT MISS! Charanjit Singh's'Ten Ragas To A Disco Beat' is quite easily one of the maddest records we've ever had in stock.

It was originally made in 1982 by a Bollywood soundtrack composer, intending to capitalise on the disco phenomenon with a combination of centuries-old classical Indian Ragas set to a disco backing. To achieve this Charanjit used a prototypical acid set-up of Roland TB303 bass melody sequencer and TR808 drum computer together with a Jupiter-8 keyboard. He basically created a sound which mirrored, and more importantly, pre-dated the first acid house record - Phuture's'Acid Track' by five years, and even preceded Chip E's'Jack Trax' in 1985.

It's no throw-away novelty record either, instead capturing the hypnotic potential of acid music in the most ornate and scarily prescient fashion, making explicit the similarities of infinitely arpeggiated bass sequences and pure electronic pulses that would soundtrack dancefloors for the next 30 odd years. The more cynical among you will probably be thinking this is Ceephax or Aphex Twin delivering one of the most elaborate in-jokes of their career, but with the gatefold sleeve depicting the original sleeve and some in-depth liner notes from the label and Charanjit, our cynicism is waning in favour of absolute shock and awe. Ten Ragas To A Disco Beat' is vintage futurism of the highest calibre, and made all the more amazing by the fact it came from India, a place hardly renowned for its electronic output! This is a remarkable record and comes with our highest recommendation - AN ABSOLUTE FIND.

Incredible release, I wish I found out about it earlier. This is by far the earliest and most seminal Acid House release - well before the Chicago caught on the 303 potential. Never mind the comparisons being made between Chicago Acid House and this stuff. This music has slim similarities to 1980s Chicago Acid House wave to come. Instead, it actually sounds more like the acid and acid house that was being pumped in Europe in early-mid 1990s - well a decade ahead of its time! This is a musical time capsule. Indian vibes mixed with the soft 303 sounds of acid music (and familiar beat) that by most accounts sound a DECADE ahead of their time, and still sound fresh today. Behold, my children, the legend of acid house: Imagine in your mind Chicago 1987, where a small group of club kids, led by Nathan "DJ Pierre" Jones, give Ron Hardy a record to play at the Music Box. Labelled "Acid Tracks" by Phuture, its uncompromising sound quickly clears the dance floor, but Hardy hammers the tune again and again, until the masses are converted and a new genre is born. You've heard this story a thousand times. And everything in it is true. Except, it seems, maybe the part about it being the birth of acid. Synthesizing: Ten Ragas to a Disco Beat challenges us to rewind acid's origin story to India 1982, and to move from a sweaty Chicago nightclub to the home studio of a veteran Bollywood musician.

In the'60s and'70s Charanjit Singh did time on the Bollywood soundtrack scene, and earned extra cash with his own orchestra playing popular favorites at weddings. In 1982, armed with a now-iconic trio of Roland gear, the Jupiter 8, TB-303 and TR-808, Singh set out to update the entrancing drone and whirling scales of classical Indian music. It's enough of a mind-fuck that rumors circulated on the web claiming the record was a prank spawned by Richard D.

A prank it's not. After nearly three decades of near-complete. Obscurity, the record resurfaced when Bombay Connection label impresario Edo Bouman snapped it up while travelling in India. He had his mind split open when, back at his hotel, he heard the psychedelic mind-meld of East and West on his portable record player. Intrigued, Bouman tracked Singh down: He was most friendly and surprised I knew the album.

I remember asking him how he got to this acid-like sound, but he didn't quite get my point. He didn't realise how stunningly modern it was. Singh's sound didn't appear wholly out of thin air.

As music critic Geeta Dayal points out. Both the 303 and the 808 had been issued right around the time, and the rhythms of'70s disco had in 1982 only just reached Indian ears. Needless to say, though, the word "disco" in the title is a complete misnomerthere simply wasn't a genre called techno or house that could be invoked.

What stands out most on Ten Ragas is Singh's comparatively original use of the TB-303. Even though it was designed to fill in for a bass guitar, the 303 was notoriously awkward when it came to reproducing conventional basslinesthe box was much better suited to produce the otherworldly squelches of DJ Pierre. Singh, however, found a different way to employ the machine. Dayal notes that the TB-303's "glissando" function, the ability to slide from one note to another, makes it perfectly suited for the sort of raga melodies that run slippery up and down the scale. Married to rugged 808s and Terry Riley-style undulating keyboard solos, The result is a haunting, exotic prefiguration of acid's steely futurism, a bit like Kraftwerk live at the Taj Mahal, somehow summoned from the past but envisioning the future at the same time.

Ragas and disco an amazing little combination, with results that are greater than the sum of its parts! This album's hardly the cheesy affair you might expect and instead of just adding a few typical Indian flourishes to disco music, Charanjit Singh comes up with a unique new groove one that's filled with plenty of weird keyboards and moog bits throughout kind of like a collision between Kraftwerk, 70s Bollywood, and P&P Records all references we can wholeheartedly endorse! The grooves are quite fast but that makes the keyboard work even more amazing, because Singh can really spin things out pretty damn quickly coming up with these hypnotic keyboard bits that are more mesmerizing than even the grooves at the bottom. Very nicely packaged, in a bold second chapter for the Bombay Connection enterprise and titles include "Raga Lalit", "Raga Khupali", "Raga Vaman", "Raga Kalavati", "Raga Todi", "Raga Malkaune", and "Raga Madhuvanti".

Just listened to Megh Malhar and it opens with the sound of thunder, the Raag "Megh Malhar" was originally rendered by Miyan Tansen some 500 years ago to impress the emperor Akbar by summoning rain through it's sound current. Thank you honoring this incredible piece of music. The lost electronic masterpiece by Bollywood Session Musician Charanjit Singh. While Kraftwerk was making catchy songs and the future inventors of acid House where still in primary school, Charanjit Singh explored the realms of abstract electronic dance music. Early 1982, Singh imported with much effort the latest Roland synthesizers into India. He had a vision of translating the centuries old indian classical ragas to the synthesizer. With his Roland TR-808 drum computer he laid a basis of a hypnotic beat, with the TB-303 and the Jupiter sequencer he created acid house-like patterns. On top of this he played the meandering melodies of ancient ragas. With its repetitive beats and hypnotic electronic melodies the album sounds light years ahead of its time. Moreover, the 10 tracks make a consistent listen from A to Z. Its restrained minimalism and lack of cheesiness makes it incredibly contemporary, sounding animated, fluid and unabashedly alive.

FOR MORE I THINK YOU SHOULD GOOGLEEEEEEEEEE!!!!!! The item "Charanjit Singh Ten Ragas GARAGE TECHNO ACID ELECTRO GROOVE PSYCH SYNTH MAD FUNK" is in sale since Sunday, August 2, 2020. This item is in the category "Music\Records".

The seller is "bollywoodshoppe" and is located in KOLKATA, WEST BENGAL. This item can be shipped worldwide.